Robert Fludd was one of the Renaissance men who viewed the micro-cosmos as an expression of the macro-cosmos. Fludd viewed all aspects of being as interrelated; the sciences, the arts and mysticism all flowed from one source and these outpourings could be followed back to their source.

Fludd wrote about everything from medicine to music. Like many brilliant minds of the Renaissance Fludd was also an inventor. 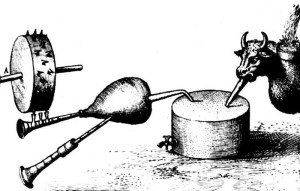 While looking through a volume containing some his inventions I stumbled across what appears to be a bagpipe that plays itself.

I do not read Latin so I present what I extrapolated by studying the illustration.

It appears that water pours into a vessel causing air within the vessel to be expelled into the blowpipe of a bagpipe. The melody is produced in a similar manner to a music box; a rotating wheel with pins opens and closes keys covering holes on the chanter.

The illustration does not show how the rotating wheel is set in motion. Perhaps there is another machine on the opposite end of the axle, or perhaps someone is turning a crank. Depending on who you are this could be a dream job or a nightmare!

I wonder if this contraption was ever constructed. If so I wonder how it was received.

Anyone out there want to build one? Let me know how it turns out!