I started making dulcimers on my parents’ kitchen table when I was 17 . When I left home I worked out of a few different shops, houses and apartments. Sometimes where I lived and worked were the same place and occasionally the same room. I was young and the world was mine.

I stopped making dulcimers when I was in my mid-twenties. I was traveling  a lot  and moving fairly often so I focused on performing rather than dulcimer making. I missed dulcimer making but it just wasn’t practical to have a shop during those years. 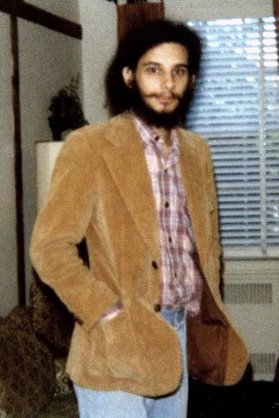 Some internet sleuthing brought up another dulcimer I had made in 1981 that was up for sale. No, I didn’t buy it but I downloaded the pictures. During that time I used variations on a lute rose pattern as soundholes on several dulcimers. I also used  teardrop or flame style f-holes on quite a few instruments back then.

Here are two pictures of dulcimer #50 from the listing I found:

Speaking of the peghead; I must have thought the shape of this peghead was a good idea at the time. What was I thinking! I was young and didn’t know any better!

6 thoughts on “A Dulcimer I Made A Long Time Ago”

An invasion of armies can be resisted, but not an idea whose time has come.