A friend on Facebook sent me a link to an Ebay auction for a dulcimer I had made in 1980. Here is the picture from the auction. 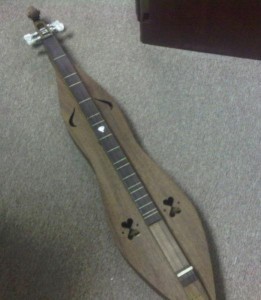 When I first saw the photograph I recognized the shape, upper sound-holes and some other features as design elements I had used in the late 1970’s and early 1980’s. The lower sound-holes seem vaguely familiar as does the pearl heart inlay at the 7th fret.

I made a number of dulcimers back then with a traditional peg-box using either wooden friction pegs or geared banjo tuners.

I did not immediately recognize the peghead as one I had made. I sometimes carved scrolls on the end of the peg box but they were a design based on some early viols. Though the photograph is not very clear this scroll seems more like that of a violin.

I could find no reference to my name in the auction listing. I wondered if someone had copied my design and added a violin scroll. On further inquiry my Facebook friend said he wrote to the owner who said it had my name, a date from 1980 and a Brooklyn, NY address on the label – it must be one of mine!

Either the angle of the photograph makes a scroll I carved look like a violin scroll, I made a dulcimer with a violin scroll and don’t remember having done so, or someone carved or added it later on.

Considering that I made it 31 years ago I am entitled to not remember!

Friendship is born at that moment when one person says to another: “What! You too? I thought I was the only one.”