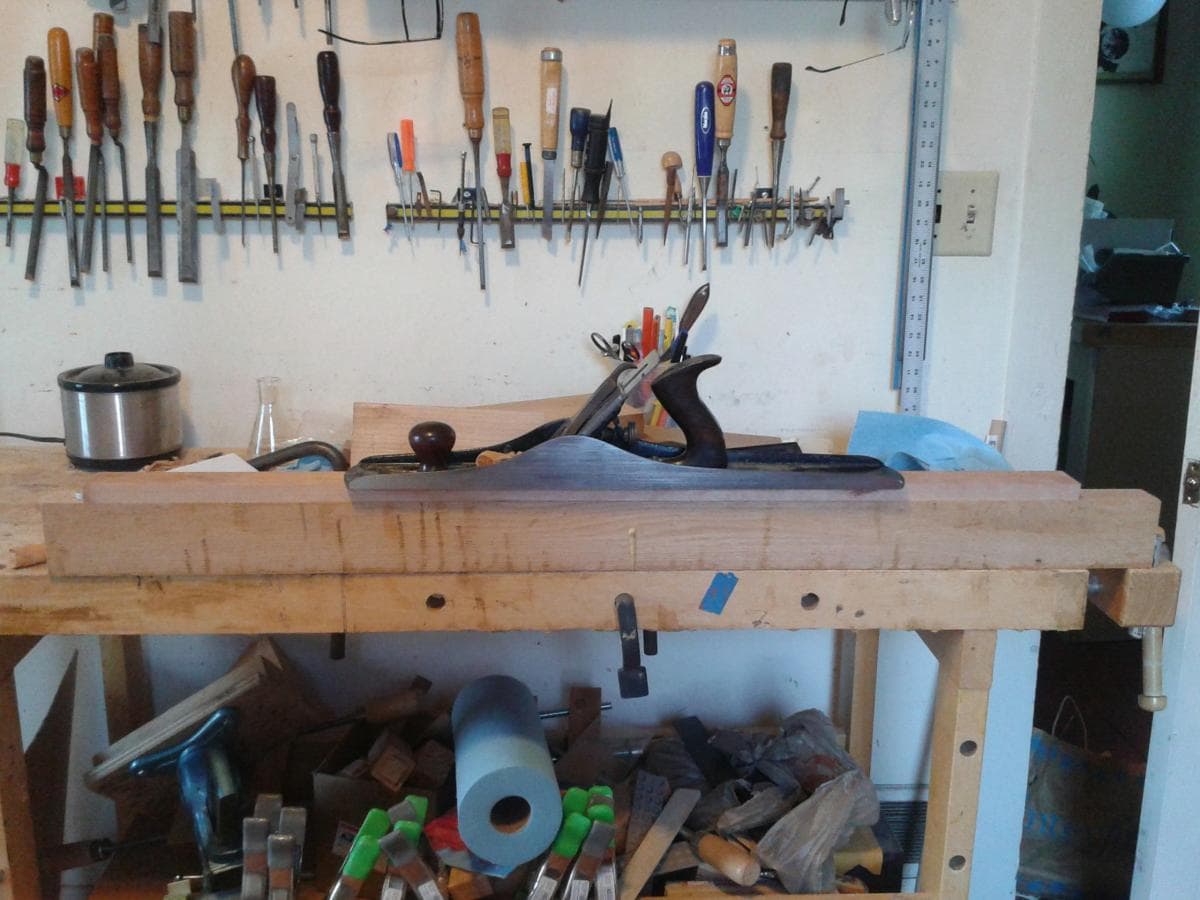 There are a few things going on in this photograph that may be of interest or amusement to dulcimer builders, woodworkers, luthiers, and those who are easily entertained.

Before describing what is happening in the photograph I will say that I am shopping for a decent camera. Years ago an excellent digital camera suddenly lost it’s mind and made any photograph it took look like a 1960’s Hippie themed B-movie hallucinogenic scene. I bought another camera and no matter what I do the photographs look grainy. I have recently been using my phone which has a mediocre camera that occasionally screws up and takes a good photograph. Soon I will have a new camera and  all the excitement shared here will be crystal clear again.

But I digress, as I often do…

When planing necks and fingerboards flat I need to place them on a flat surface, otherwise the wood takes on the irregularities of the surface on which it is planed. In the past I would plane the top of the bench flat once or twice a year to assure it was an accurate work surface. Over the years my dulcimer making techniques have evolved and a lot of the work that took place on the bench now takes place on flat work-boards mounted in a vise and suspended above the bench. This places the work at a more comfortable working height, assures a flat surface, and makes it easier to clamp parts together.

Using work boards eliminated most of the need for a dead-flat bench but I still needed a long, flat surface for working on necks and fingerboards. I solved the problem by truing up a beam of quartersawn oak and using it as a bench-on-a-bench. I drilled a hole for a bench dog on one end. This bench dog also goes through the oak and into a dog hole on the bench. I lock the beam in place using a bench dog in the end vise and plane away.

In the photograph a cherry neck is getting planed with a #7 plane. The cherry has been planed a few times before. I plane fingerboards flat and then let them sit for a week or so and then plane them again.  After a few more weeks I do the final planing before turning the wood into a neck/fingerboard. The idea behind this is to let the wood move and adjust to stresses released and new surfaces exposed to the environment after planing and then true it again. And again.

From the right point of view, every storm and every drop in it is a rainbow.