This is a strange one.

Last night  for no particular reason I searched for ‘dulcimer” on Ebay. Imagine my surprise when I saw a photograph of myself as an illustration for a “product” I have nothing to do with. 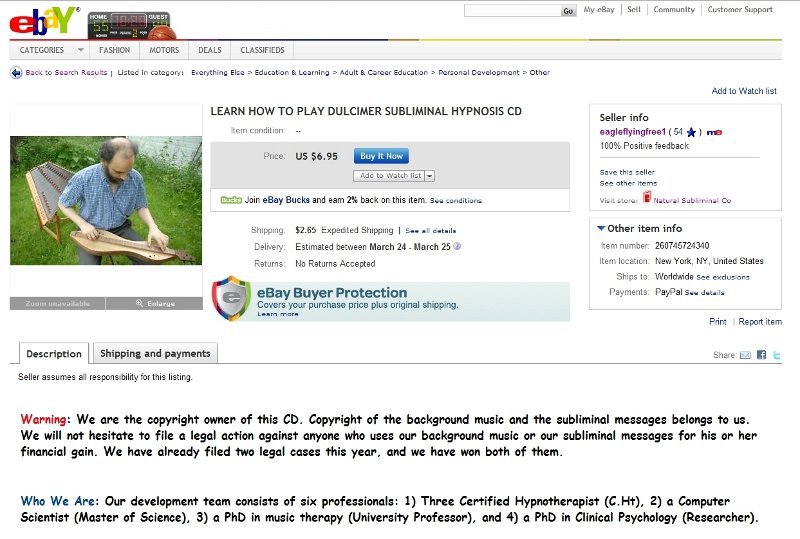 There I was, visually associated with a CD that would hypnotize you and give you subliminal suggestions to make you a dulcimer player. Really. I am not making this up!

For the record, I have NOTHING TO DO WITH THIS!

I was amused that the advertisement began with a stern warning that these folks owned the copyright on their CDs and would prosecute anyone copying their product. They did not seem to extrapolate from this concern that perhaps they should not use my photograph without my permission.

I wrote to these folks telling them that I have nothing to do with their product and that I do not want them using my photograph. I also let them know that they were in violation of my copyright on the photograph.

They did reply and I was told they were sorry for the “accident.” Accident? Did someone trip and accidentally fall on a keyboard causing a search, cut and paste of a photograph on my website? Well, stranger things have happened.

They said they would remove my photograph and indeed they have. There is now a photograph of a dulcimer and hammered dulcimer no doubt taken from someone else’s page.

In over 30 years of playing the dulcimer and hammered dulcimer I have never felt the need for using hypnosis and subliminal messages to enable me to be a player. Devotion, immersion, dedication and perhaps obsession came in handy as did a lot of study and practice.

As for subliminal messages, my general opinion is that if I can not  hear the  words being spoken, then they are probably not telling me anything.

And if it does work I would be very leery of using such a product. For all I know the messages could really be saying, “Every time someone honks their car horn you will have a sudden urge to evacuate your bowels.”

19 thoughts on “Imagine My Surprise”

To really know is science; to merely believe you know is ignorance.