I have read that scrapers may be one of the earliest tools used by early humans. Though scrapers are very simple tools they are still in use today.

The basic cabinet scraper is a rectangle of steel hard enough to hold an edge but soft enough to be easily sharpened. Most scrapers are made of the same steel used to make handsaws.

I always have a scraper or two on the bench. I use them constantly for trimming, fitting, cleaning and smoothing just about every part of an instrument.

Though simple in concept many people including myself have found getting the hang of using a scraper to be elusive at first.

The trick is in learning to prepare the edge of the scraper.

The following illustrations demonstrate the basic principals. of preparing a scraper. I found these in an old woodworking manual somewhere. Each craftsperson eventually finds their own preferred way to accomplish preparing a scraper (an everything else for that matter!)

The tools needed are a scraper (surprise!) a mill file, and sharpening medium or fine sharpening stone and a burnisher.

Burnishers are available from most woodworking tool shops. They are usually just  a polished hard steel rod mounted in a handle.

A vise can be helpful when preparing a scraper, especially when filing the edge. 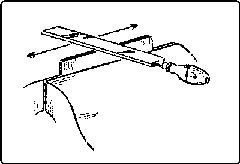 First the edge is trued with a file. The goal is to get the edge straight and square. This is best done using a smooth mill file with the scraper in a vise.

Next comes the process of stoning the edge. The edge is brought to a fine finish on a sharpening stone. I often use a block of wood to help me keep the edge true to the stone. For very fine scraping this is all the preparation needed. For general scraping a bur is next turned on the edge of the scraper

After stoning the edge the scraper is laid flat near the edge of the bench and the burnisher is pressed and slid against the flat surfaces with pressure to encourage the formation of a bur along the edge. 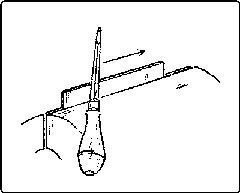 It takes some experimentation and practice to get the hang of this. Writing about how to prepare a scraper is like trying to describe how to tie one’s shoes; it sounds more complicated than it really is. I can usually show someone how to get a good edge and bur on a scraper in a few minutes in person.

2 thoughts on “Preparing a Scraper”

Where justice is denied, where poverty is enforced, where ignorance prevails, and where any one class is made to feel that society is an organized conspiracy to oppress, rob and degrade them, neither persons nor property will be safe.