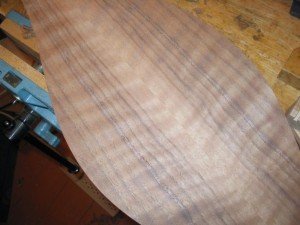 In my  post titled “Why Would Anyone Steam Walnut?” I wrote about my disappointment with the effect steaming has on the color of walnut lumber.

I have read of various options for enhancing the color of steamed walnut. On this dulcimer I decided to try garnet shellac.

I sealed the grain with 1lb cut blond shellac and then applied a coat of 1lb cut garnet shellac. The garnet shellac brought out brown tones and vastly improved the coloring.

I was still disappointed; the sapwood was still obviously darker than it should be and the subtle colors the wood had before steaming could not be replaced.

I had taken care to apply  the garnet shellac evenly to avoid blotching.

I wondered if intentionally thinning the garnet shellac in some spots would help adjust the depth of color in some areas. 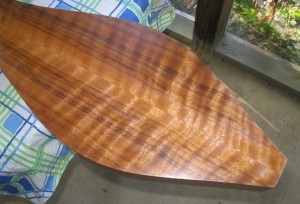 While sanding the shellac in preparation for the next coat I sanded a little heavier over the sapwood and a few other areas. This added a little contrast and also gave the piece a little bit of an antique look.

After applying the first coat of clear finish I’m thinking the results are looking promising.

When given a choice I still prefer the color of natural, unadulterated  wood.

A man cannot make a pair of shoes rightly unless he do it in a devout manner.