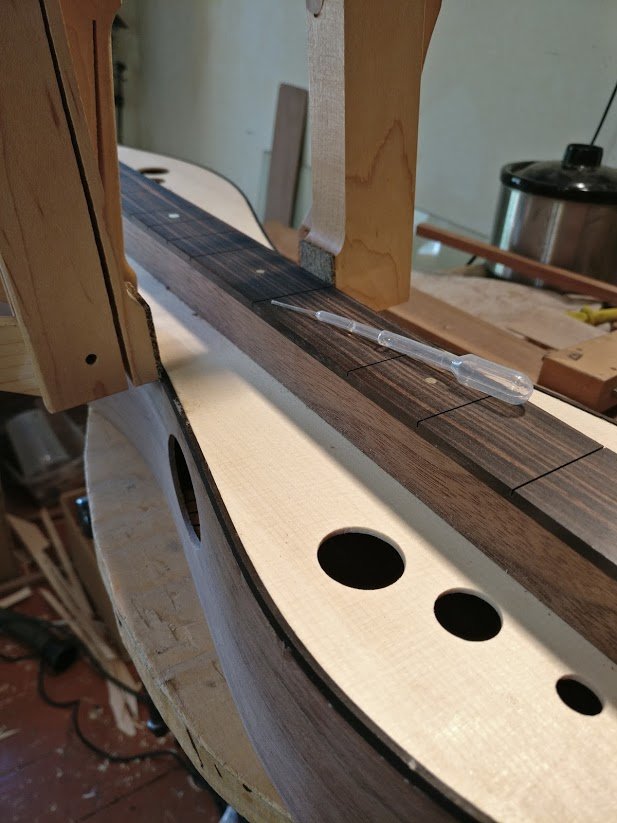 The other day I noticed an unsightly gap in the binding around the soundboard of a dulcimer I am currently working on. Small gaps are not uncommon when binding an instrument and there are several methods for filling them.

This gap was large enough to cause me to consider removing the binding and starting again. The gap was about 2 inches long and barely open enough to catch a fingernail (my default tool for checking gaps) but I would not have slept well just filling it and calling the job done. No one would ever know but I would know I could and should have done better.

Before replacing the binding on one side of the dulcimer I thought I’d try another method of repair. At best it might solve the problem, at worst I might aggravate the problem but I was going to replace the binding anyway.

I ran hot water into the gap several times with a pipette to soften the glue and clamped the binding against the body to close the gap.

After a few hours I took off the clamp and the gap was barely noticeable. The soundboard had swollen a little due to applying hot water so I let the repair dry over night.

The next day most of the swelling had left the soundboard and after cleaning up the area with a scraper and file the gap was almost invisible. After applying a small amount of filler and a bit of spot sanding the gap was gone. 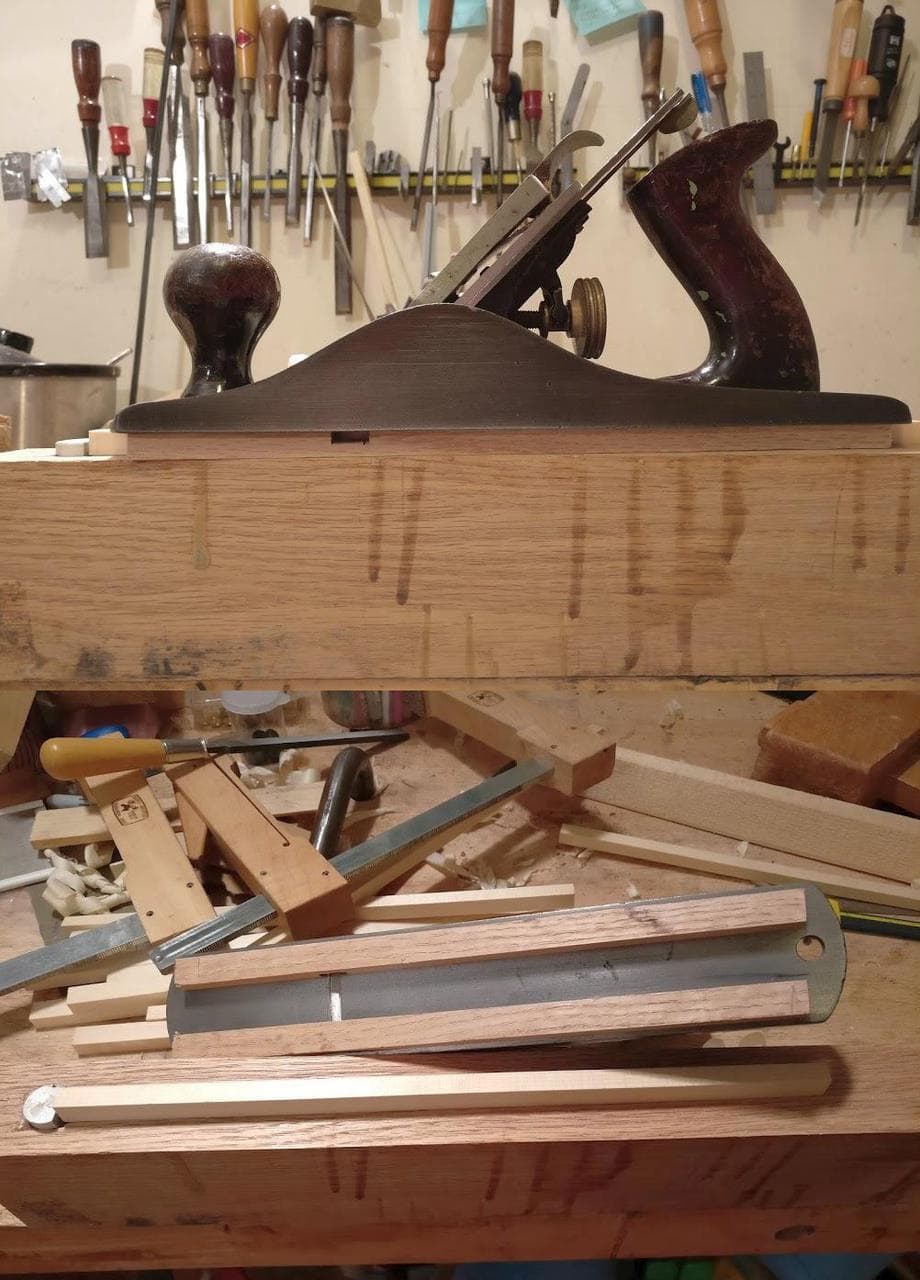 A few drops of super glue temporarily hold two wood runners to the bottom of a plane, in this case a Stanley #5 1/4 for those who care about such details. The plane can not take off wood below the height of the runners so repeatedly planing wood to the same height becomes easy. The top and bottom of the workpiece will also be parallel.

In the photograph I’m planing spruce brace stock for dulcimer backs. The rough brace sits on my planing beam; a flat and straight beam of oak with a bench stop at one end. I use this planing beam when truing and jointing fretboards and fingerboards, thinning bindings, and brace stock. I also use the planing beam as a caul when gluing fingerboards to fretboards.

Yes, it is a fascinating life I lead.

Though I have done it countless times I am always amazed when a straight. flat, piece of wood turns into the curved shape of a dulcimer. Heat and moisture make wood pliable. It’s that simple. 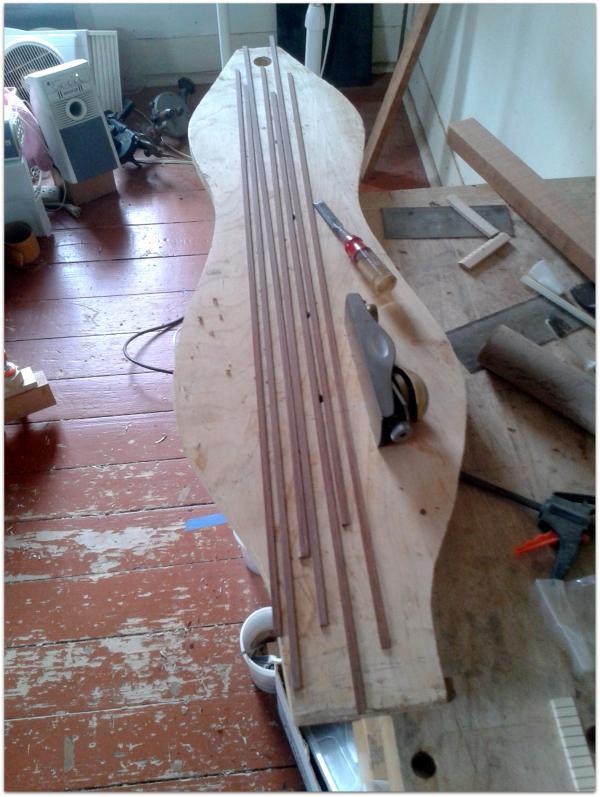 A quick spray with distilled water and the beautiful bubinga binding strips are taped together so they are easy to manage when going into the heated bending form. Since these will all be bent to the same shape this is a quicker method than bending them freehand on a hot pipe.

Here they are in the bender. Though you can’t see them in the bending form I assure you there is beautiful bubinga binding being bent. 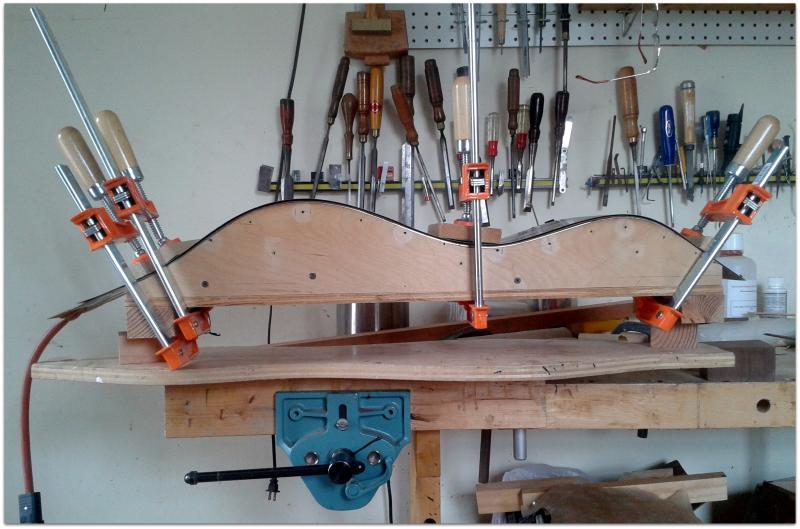 And last but not least here is bent beautiful bubinga binding! 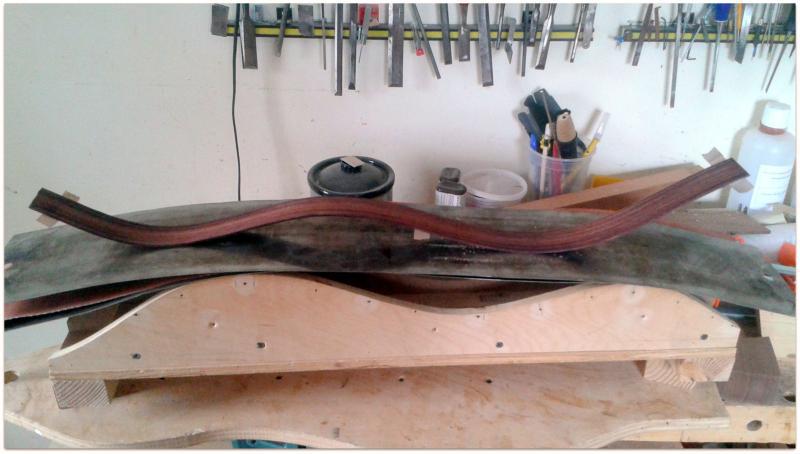 Today’s post has been presented by the letter “B.”