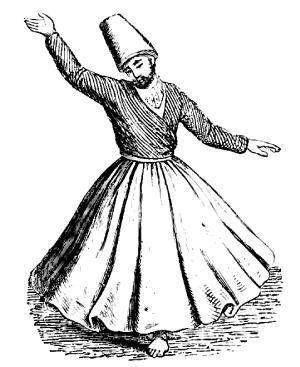 Today, like every other day, we wake up empty and frightened.
Don’t open the door to the study and begin reading.
Take down the dulcimer.
Let the beauty we love be what we do.
There are hundreds of ways to kneel and kiss the ground. 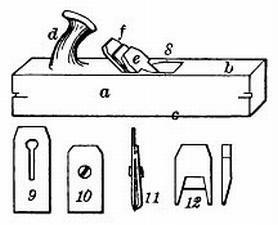 The first sign of Spring coming was noticing my wooden jack plane now has a twisted sole. Ah yes, the weather is changing!

I keep the humidity in my shop relatively stable by using a humidifier during Winter and a dehumidifier in the Summer. A  hygrometer helps me tweak everything to keep the environment between 45%-50% humidity.

Humidity control is very important in many woodworking shops but it is critical when making musical instruments. The thin wood used in stringed instruments can warp or split easily with changes of environment. Some slight movement in  a fingerboard can cause an instrument to become difficult to play.

By building instruments in a environment of 45%-50% humidity the final instrument will be fairly stable in more humid environments and won’t react too quickly to somewhat lower levels of humidity.

Still, it is important to use a humidifier if you live somewhere with low humidity or if the air in your home is very dry. You can keep the instrument in a case with an instrument humidifier or keep a room for your instruments at the proper humidity.

Some early signs of an instrument drying out are:

If caught early returning the instrument to proper humidity will soon reverse the problems. If the instrument is not returned to a proper environment damage can very likely occur. You’ll notice major warping, cracks, etc.

Now I am off to true the sole of my favorite wooden jack plane, check the humidity of my shop and get back to work!

When I was a teenager an older friend gave me a very helpful piece of advice.

He said, “You are a creative person and you may find that you don’t fit in mainstream culture. This can make you feel like there is something wrong with you, but really,  it’s just that you are creative.  You won’t necessarily be happy with the things that make other people  happy. It may not be easy but you”ll find your way.”

This was some of the best advice I have ever received.

A common thread among the creative people I know is passion; a passion that drives them to prioritize that which they are passionate about. 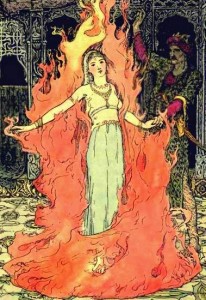 Passion and creativity are not limited to music, crafts, art, etc.. The objects and objectives of passion are endless. 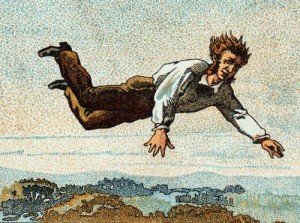 The creative, passionate person will not feel alive unless they are expressing creativity and passion.

With all this comes a need for balance.

And there will be surprises.

And I think I already said something about trade-offs.

It’s all part of the adventure.

“Let the beauty we love be what we do. There are hundred of ways to kneel and kiss the ground”

The Internet Archive has something for everyone. Books, music, film and more, usually copyright free or opensource.

It was here that I found this book:

“The Music of Nature, or, An Attempt To Prove That What is Passionate and Pleasing In The Art of Singing, Speaking, and Performing Upon Musical Instruments, Is Derived From The Sounds of The Animated World” by William Gardiner , published in 1832.

I have read a several books written by musicians, historians and mystics who have expressed that the origins of what is considered musical is based on principles found within the natural world.

One of the more interesting features of this book are the musical transcriptions of bird songs, the sounds of various animal, and the rhythm and tonal inflection of human speech.

I include a few of the transcriptions below. 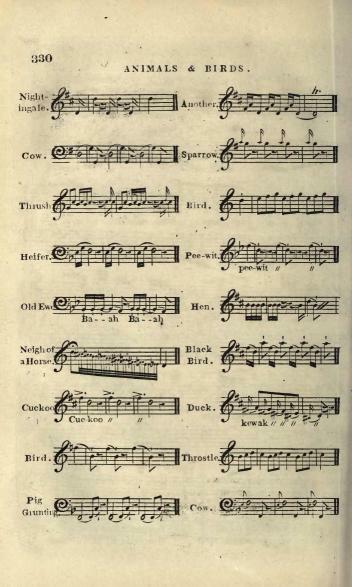 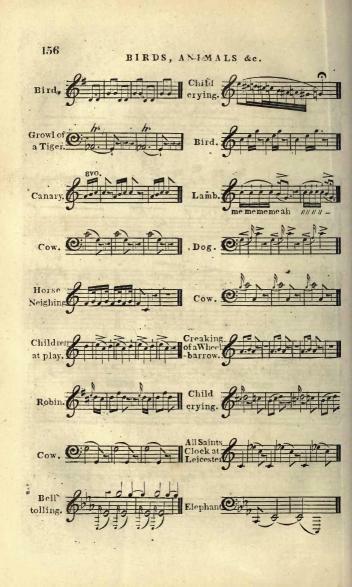 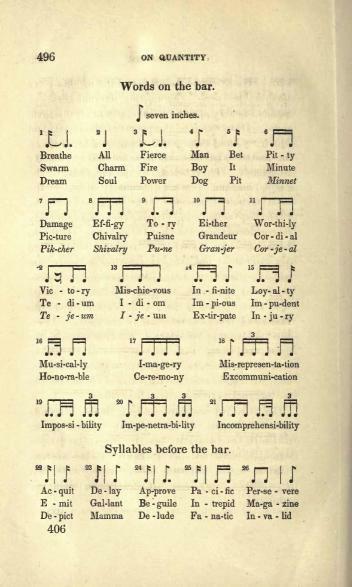 “It will always prove to be true that when a person takes no heed of rhythm, whether he does right or wrong, good or evil, in either case a wrong rhythm will make him fail. For rhythm is not only a law to which nature is subjected, but it is something that maintains things as they are and gives things and beings the power to continue to live and to progress.”

When others saw the completed bell stands, they were startled and thought they must have been created by supernatural beings.

The Marquis of Lu saw one of them and asked: “What special art (artistic skill) do you have to be able to do this?”

He replied, “Your humble servant is merely an artisan. What special artistic ability could I have?

However, I do use one system.

When I’m about to create a bell stand, I’m careful not to expend too much of my vital energy, so I have to first settle my mind and heart in calmness.

For three days I prepare myself by giving up on any ideas of praise or rewards for my work.

The next five days I prepare by not being concerned whether my work will be criticized or considered to be not perfect enough.

Then for seven days I prepare myself by forgetting about the prescribed shapes of things including the shape of my own body. By that time I’ve lost all consideration as to what the royal court would demand of me, concentrate completely on my task, and outside influences just disappear.

Then I enter the mountain forests and observe the naturalness of the heavens. By seeing that all the shapes around me are complete of themselves, I can envision a completed bell stand. At that point I can actually start working with my hands, but not until then.

It’s because I use the heavens to fit perfectly with the heavens that some suspect my tools were used by spirits. That’s all there is to it!” 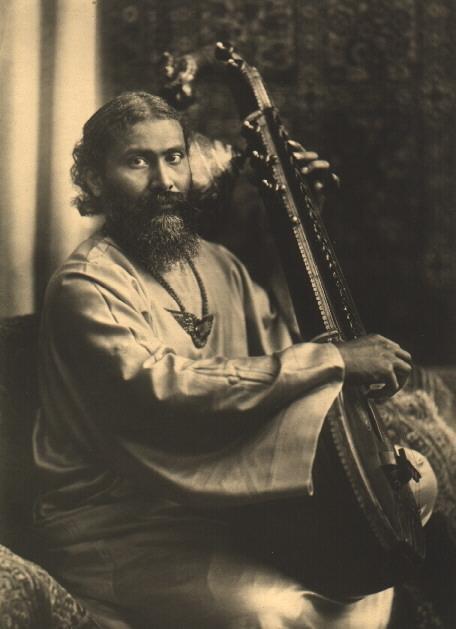 “As to what we call music in everyday language, to me architecture is music, gardening is music, farming is music, painting is music, poetry is music. In all the occupations of life where beauty has been the inspiration, where the divine wine has been poured out, there is music. But among all the different arts, the art of music has been specially considered divine, because it is the exact miniature of the law working through the whole universe. For instance, if we study ourselves we shall find that the beats of the pulse and the heart, the inhaling and exhaling of the breath are all the work of rhythm. Life depends upon the rhythmic working of the whole mechanism of the body. Breath manifests as voice, as word, as sound; and the sound is continually audible, the sound without and the sound within ourselves. That is music; it shows that there is music both outside and within ourselves.”

“Many in the world take music as a source of amusement, a pastime, and to many music is an art and a musician an entertainer. Yet no one has lived in this world and has thought and felt, who has not considered music as the most sacred of all arts, for the fact is that what the art of painting cannot clearly suggest, poetry explains in words; but that which even a poet finds difficult to express in poetry is expressed in music. By this I do not only say that music is superior to art and poetry, but in point of fact music excels religion; for music raises the soul of man even higher than the so-called external forms of religion.

By this it must not be understood that music can take the place of religion; for every soul is not necessarily tuned to that pitch where it can really benefit by music, nor is every music necessarily so high that it will exalt a person who hears it more than religion will do. However, for those who follow the path of the inner cult, music is essential for their spiritual development. The reason is that the soul who is seeking for that is in search of the formless God. Art no doubt is most elevating, but at the same time it contains form; poetry has words, names suggestive of form; it is only music which has beauty, power, charm and at the same time can raise the soul beyond form.” 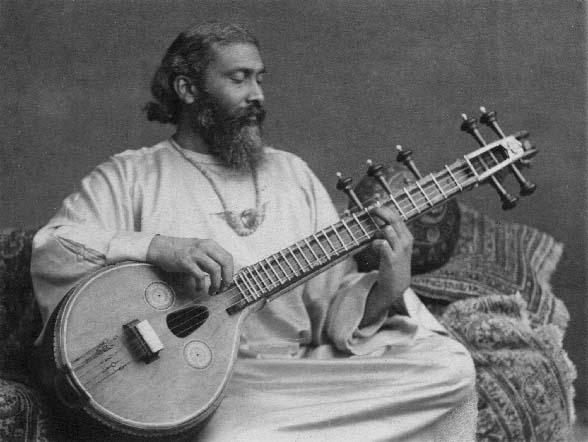 “I gave up my music because I had received from it all that I had to receive. To serve God one must sacrifice what is dearest to one; and so I sacrificed my music. I had composed songs; I sang and played the vina; and practicing this music I arrived at a stage where I touched the Music of the Spheres. Then every soul became for me a musical note, and all life became music. Inspired by it I spoke to the people, and those who were attracted by my words listened to them, instead of listening to my songs.

Now, if I do anything, it is to tune souls instead of instruments; to harmonize people instead of notes. If there is anything in my philosophy, it is the law of harmony: that one must put oneself in harmony with oneself and with others. I have found in every word a certain musical value, a melody in every thought, harmony in every feeling; and I have tried to interpret the same thing, with clear and simple words, to those who used to listen to my music.

I played the vina until my heart turned into this very instrument; then I offered this instrument to the divine Musician, the only musician existing. Since then I have become His flute; and when He chooses, He plays His music. The people give me credit for this music, which in reality is not due to me but to the Musician who plays on His own instrument.”

“I have two ways of loving You;
a selfish one and another way that is worthy of You.
In my selfish love I remember You and You alone.
In that other love You lift the veil and let me feast my eyes on Your Living Face.” 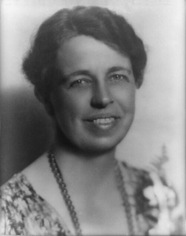 “It is better to light a candle than curse the darkness.”

“What one has to do usually can be done.”

“What is to give light must endure the burning.”

“A little simplification would be the first step toward rational living, I think.”

“I like the man who cultivates poetry for self-instruction, not for lucre, and the man who practices music for pleasure, not for gain” 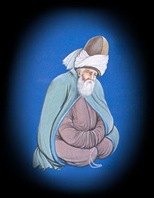 Reason is Powerless in the expression of Love.
Love alone is capable of revealing the truth of Love and being a Lover.
The way of our Prophets is the way of Truth.
If you want to live, die in Love; die in Love if you want to remain alive.

Friendship is born at that moment when one person says to another: What! You too? I thought I was the only one.