Perhaps a better title for this post would be “I Do Better Work When Tools Are Sharp!”

The other day I found myself enjoying working at the bench less that I usually do. I was having a hard time clamping a dulcimer firmly enough to the bench so that I could plane the fingerboard flat.

At that moment the “smart fairy” (or perhaps the “stupid fairy” depending on how you look at it) whispered in my ear, “Hey Doug, don’t you usually hold the dulcimer on the bench with one hand and plane the fingerboard with the other? When was the last time you sharpened that plane?”

“Hmmm,” I said. “This plane sure stays sharp for a long time, but how long has it been since I last sharpened it?”

Out came my benchtop sharpening rig; a bench hook that holds a fine diamond stone and a #4000  waterstone. This is what I usually use to keep edges honed between regrinding. 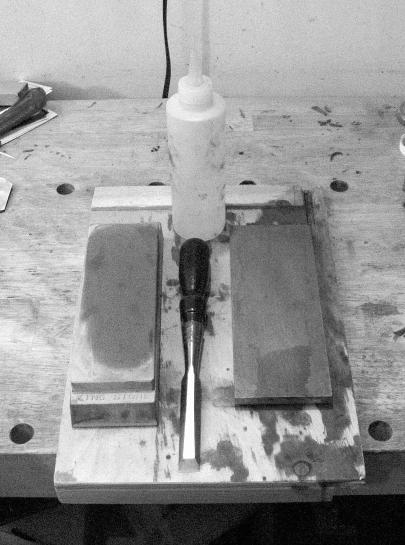 And it had been a while since I had sharpened that particular plane.  And lo and behold, after sharpening the plane I could easily hold the dulcimer with one hand and plane the fretboard with the other and take finer shavings to boot!

I figured that as long as I had the sharpening station on the bench I may as well sharpen a few other tools.

And they all lived happily ever after. Well, at least so far…..

P.S. I had some trouble with my camera so the picture of the sharpening stuff looked better in B&W. It reminds me of pictures from the early issues of Fine Woodworking.

I think we ought always to entertain our opinions with some measure of doubt. I shouldn’t wish people dogmatically to believe any philosophy, not even mine.